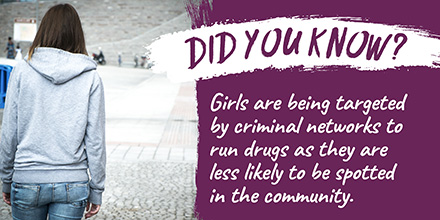 As well as members of the public, all staff working within and around a station, from ticket collectors to engineers, coffee shop workers to cleaners, play an important role in safeguarding vulnerable young people.

A young person may use a station or form of public transport in an attempt to disappear. Children run away for a number of reasons, on most occasions they return home safely. Every situation is different and there are no set rules about when a child should be considered missing. However, if you have any doubts about whether to contact the police formally to report a child missing, the police will be happy to discuss your concerns and offer advice about what to do.

Find out more about what to do if your child is missing.

Essex County Lines Campaign - Local campaign to increase knowledge and understanding, including where to turn to for help​.

Lines by TIC Box Productions - Inspired by a true story, this show explores county lines, where young people are groomed to traffic drugs from cities to coastal towns and rural areas.

Together we can stop sexual harassment | British Transport Police (btp.police.uk) - The Railway Guardian app is part of the 'Speak up, interrupt' campaign. The campaign will run all summer and aims to encourage the public to become an active bystander in situations where they feel safe to do so as part of the zero tolerance on rail sexual harassment campaign.

Bitesize training session on Child Exploitation from The Railway Children.